On Modernism in landscape painting

Quebec artists, who traditionally traveled and studied in France, were initiated very early to Modernism in painting. Artists such as Marc-Aurele Fortin (1888- 1970), took inspiration from the Quebec countryside to create his majestic trees and  dancing cloud formations, rendering his paintings with a conviction equal to the French landscapes of Cezanne.

Modernism in landscape painting was introduced to the rest of Canada by the Ontario-based Group of Seven (1920 - 1933), several of whom had studied in France and other European countries; these artists became famous internationally for their depictions of the great and vast Canadian expanse. They journeyed across the country depicting the Great Lakes, primal forests and Northern regions.
A.Y. Jackson used vibrant, saturated oranges and yellows in paintings of Western Canada ;Lauren Harris painted moonlit, icy scenes of Lake Superior and semi- abstracted mountain peaks.

The American artist, Winslow Homer (1836- 1910), painted landscapes and seascapes of his beloved Maine in both watercolor and oil. His marine themes are well-known, including fishing scenes, moonlit and sunlight oceans.  He described himself as a social realist; but I would describe him as a Modern realist with a generous splash of impressionistic light.

The following paintings are my own interpretations of lake views and landscapes: 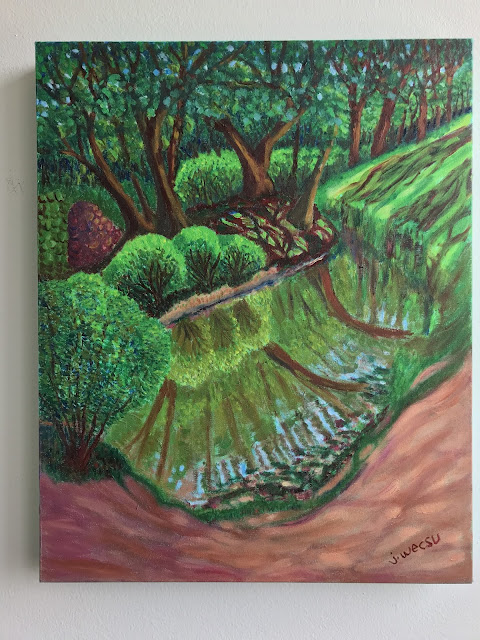