The Surrealist Movement in the Visual Arts:

When we speak of Surrealism in the visual arts, one major, international figure comes to mind: the Spanish painter, Salvatore Dali (1904-1989).  In fact, Dali was both an artist and a theoretical writer whose contribution to Surrealism covered a span of many decades, well into the 1970's.
However, the Surrealist Movement grew out of the Dada Movement (1916), with Francis Picabia and Marcel Duchamp.
The driving force in the establishment of Surrealism was delivered by the French poet and essayist, André Breton, who published " The Surrealist Manifesto" in 1924.  In 1917, Breton, a medical student, worked as a medical auxiliary in the psychiatric ward of a military hospital.  The soldiers' reports of their tortured visions inspired Breton's psychological basis for Surrealism.  During the same period, Sigmund Freud was formulating his psychoanalytical theories on the unconscious and on dreams.
" Breton considered the surreal as a dialogue of what is encountered by way of dreams, chance, coincidences; never predetermined, but spontaneous: defying rational discourse which the surrealists held responsible for the catastrophes of war." [ from" Surrealism"; 2010.  Edited by Mary Ann Caws, Phaidon Press, London, NY.]
Therefore, to release the full potential of the unconscious mind, while overcoming the rational, was the goal of Surrealism.
________________________________________________________________
I have taken up a study of Surrealistic painting and have included my own painting below.  I have called it " The Rethinker" for obvious reasons.
I wanted to pay tribute to several masters of the Surrealist Movement and these compose the back walls, behind my own central figure.
To the right, we are visited by the Belgian artist and writer, René Magritte (1898-1967), who joined the Surrealist artists of Paris in 1926.  He was interested in the relationship between philosophical and perceptual notions.  He developed the idea of Inside-Outside illusionistic painting.
At an angle and down the corridor, we find the Greek-Italian artist, Giorgio de Chirico ( 1888-1978).  De Chirico founded the metaphysical school of painting.  He is famous for his statues, Roman columns, distant trains and long shadows.
To the left, behind "The Rethinker", is part of a mural created by the German-American artist, Max Ernst (1891-1976).  Ernst was a prolific artist of the Surrealist Movement both in Europe and in America.  He was linked both professionally and romantically to two famous female surrealists: Lenora Carrington and Dorothea Tanning; the latter becoming a leading figure of the Movement in the USA.
The Rethinker is an example of an " Anthropomorphic Happening" whereby the artist takes the place of the statue.  We often express love for a particular artist when actually we love his/her artwork; the two appear to be interchangeable.
____________
My Painting:" The Rethinker", measures 30 in by 30 inches. Oil on Canvas. 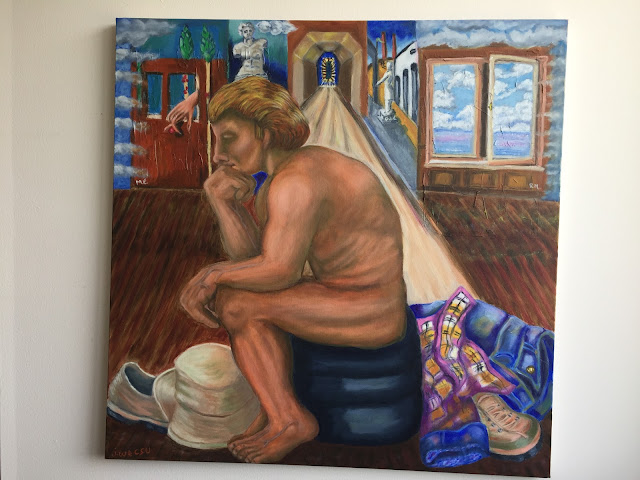 _____________________________________________________________________________
2. Salvador Dali (1904-1989)
Dali was born in Catalonia, Spain and studied at the Madrid School of Fine Arts.  From 1929-1935, he played a leading role in the Surrealist Movement, being an active contributor to " Le Surrealisme au Service de la Révolution" (1930-1933), as well as being a leading participant in the International Surrealist Exhibition of 1938 in Paris, France.
In 1939, Dali settled in the United States, in California, where he became immensely popular for his artistic technique and his eccentricity.  He returned to Spain in 1955.
In his book: The Secret Life of Salvador Dali (New York, 1942), Dali wrote about his process:
" The first image of the morning was that of my canvas, and it was also the last image I would see before going to bed.  All day long, seated at my easel, I would gaze at my canvas like a medium, to see welling up from it the elements of my own imagination. That work was carried out in the unconscious, between sleep and waking, in a state of hypnogogical submissiveness." ( from "Surrealists and Surrealism", Gaetan Picon.  Rizzoli Interrnational Publications, 1988).
In recognition of his great talent, I have created my own tribute to this icon of the visual arts called: "For the love of Salvador/ Pour l'amour de Salvador".
"Salvador", from the Spanish, is translated as  "Savior"and represents the conflagration of conflicting religious doctrines in the Middle East.
Oil on Canvas, 30in X 30in. 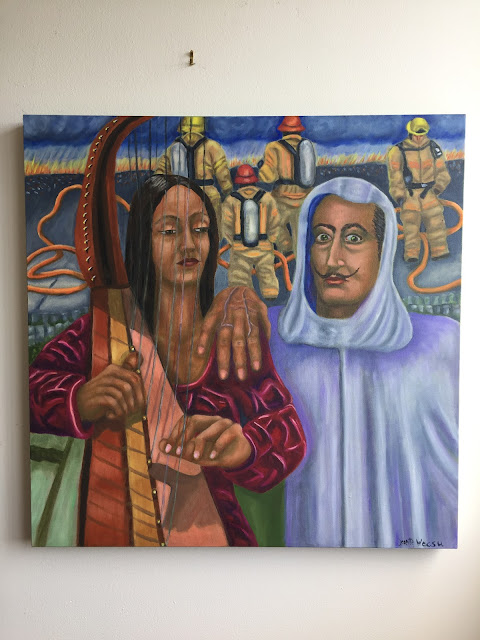 My third painting: "The Battle of the Monuments", is a Surrealist history painting with its roots set in the struggles during the establishment in Quebec of the territories which encompass Montreal and its surrounding regions.  In this painting, the various Monuments, erected to the heroes of these battles and its brave warriors , come to life to continue animosities and attack one another as in the past.  In a world where countries have experienced battles, ethnic and religious struggles and jealousies, a minor discord can at times ignite a fuel of vengence. 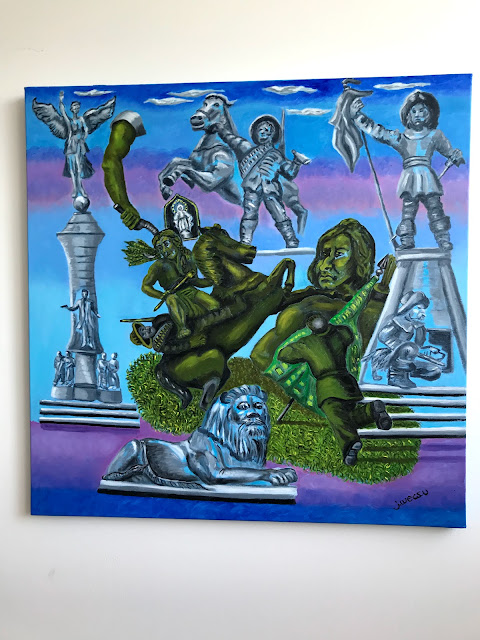 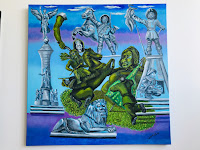